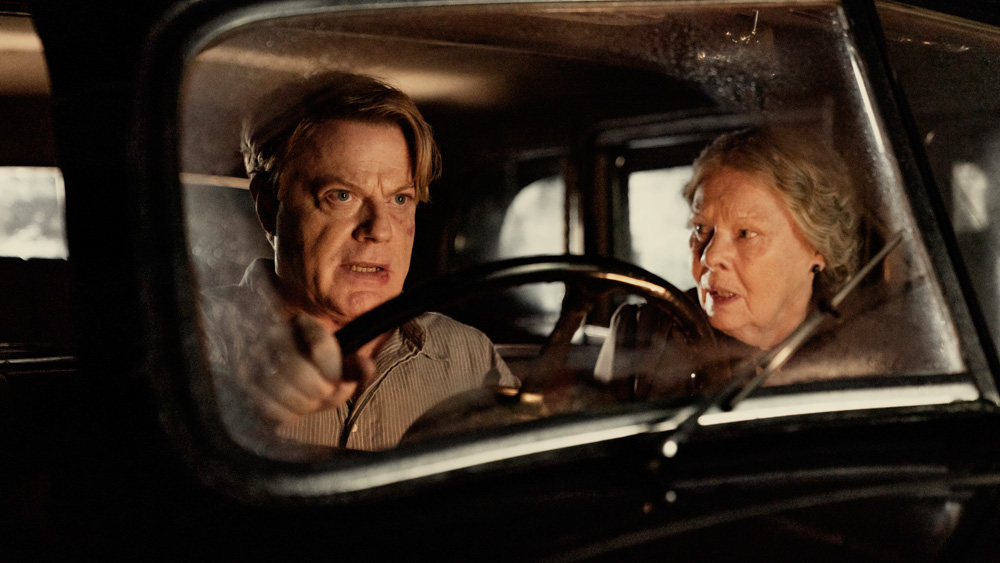 More films with Eddie Izzard and Judi Dench is something that the world needs. They starred together in Stephen Frears’ Victoria & Abdul in 2017 and now they reunite in the Andy Goddard-directed Six Minutes To Midnight which will be released by IFC Films in theaters and on demand starting today.

Written by Izzard, Goddard and  Celyn Jones, Six Minutes To Midnight is based on true events from 1939. The film follows teacher Thomas Miller (Izzard) who has taken a last-minute and controversial role teaching English to the daughters of high-ranking Nazis at the Augusta-Victoria College, Bexhill-on-Sea – a finishing school on the south coast of England.

Under the watchful eye of their headmistress Miss Rocholl (Dench), and her devout assistant Ilse Keller (Carla Juri), the girls practice their English and learn how to represent the ideal of German womanhood.

When the body of a former teacher is discovered, it triggers a sequence of deadly events and leaves Thomas running from the police with the threat of being hanged for murder.

If you have ever watched The Eric Andre Show, then you will probably know what to expect from his upcoming film Bad Trip…or maybe it will all be unexpected because the comedian and actor knows how to keep everyone on their toes — and it is a joy to watch.

Dropping on Netflix today and directed by Kitao Sakurai, the hidden camera comedy is cut from the same cloth as feature films like Jackass and Bad Grandpa. In fact, the movie comes from the guys that brought you those bundles of joy.

Starring Andre, Lil Rel Howery, Michaela Conlin, Tiffany Haddish, and a bunch of real-life innocent bystanders the comedy (written by Andre, Sakurai and Andre) follows two best friends as they go on a cross-country road trip. Sound fun, right? Well, they are traveling cross country in a stolen car from one of the friends’ sisters who broke out of jail. Now, she is chasing them. Lots of hilarity ensues. Don’t believe me? Watch the trailer below.

HBO and HBO Max release the documentary, Tina which spotlights the music and cultural icon on March 27. Directed by Oscar-winning filmmakers Dan Lindsay and T.J. Martin (Undefeated), the docu gives an intimate and very revealing look at the life and career of Turner.

The docu includes interviews with the queen herself from her castle in Zurich, Switzerland as well as some of those close to her. This includes Angela Bassett, who should have won the Oscar for playing Turner in What’s Love Got To Do With It; journalist Kurt Loder who co-authored “I, Tina”; playwright Katori Hall, the writer of Tina – The Tina Turner Musical; the one and only Oprah Winfrey, husband and former record executive Erwin Bach, among many others.

Tina charts her rise to early fame, her personal and professional struggles throughout her life and how she rose from the ashes to conquer the world as a global phenomenon in the 1980s.

Director Giorgio Serafini is about to give you a Senior Moment with pop culture icons William Shatner (Star Trek), Jean Smart (Designing Women), Christopher Lloyd (Back to the Future), Esai Morales (La Bamba) as well as Katrina Bowden (Tucker and Dale vs Evil, 30 Rock) and Carlos Miranda (The Bling Ring, Vida).

Senior Moment, which Screen Media will release in select theaters and on demand today, follows Victor Martin (Shatner), a retired NASA test pilot who is often seen speeding around Palm Springs in his vintage Porsche convertible with his best friend Sal (Lloyd).

When his car is impounded after his license is revoked for drag racing his life does a 180.  He is forced to take public transportation for the first time — where he meets his polar opposite Caroline (Smart) and learns to navigate love and life again as he goes up against the state’s new DA to get back his license and car.

Written and directed by Stephen Kijak, The Shoplifters of the World is drenched in ’80s music flair — and if your a fan of The Smiths, this one is for you.

Set in the summer of 1987, the pic follows four friends who are all up in their feelings after the sudden break-up of the iconic British band The Smiths. In order to deal with their grief, they embark on a night of partying.

While this happens, a diehard Smiths fanatic takes a local radio DJ hostage at gunpoint and forces him to play nothing but Smiths tracks. With the radio station playing as the soundtrack to their night, the friends go on a wild journey of self-discovery that will transform them forever. RLJE Films releases the film on demand and on digital today.

Saban Films is ready to open The Vault this weekend. The heist thriller directed by Jaume Balagueró opens in select theaters, digital and on demand today.

The pic follows an engineer (Freddie Highmore) who learns of a mysterious, impenetrable fortress hidden under The Bank of Spain. He joins a crew of master thieves who plan to steal the legendary lost treasure locked inside while the whole country is distracted by Spain’s World Cup Final.

With thousands of soccer fans cheering in the streets, and security forces closing in, the crew have just minutes to pull off the score of a lifetime.