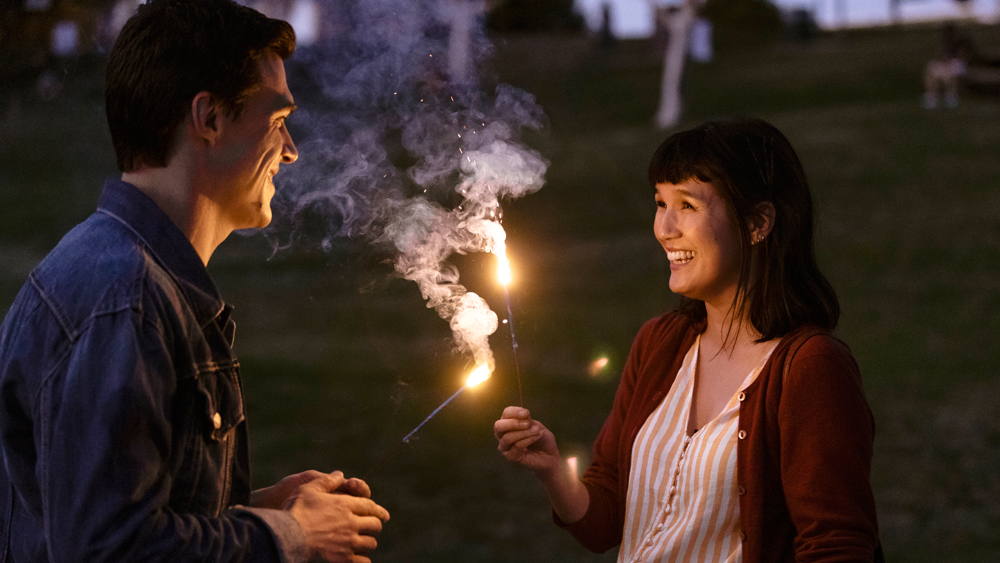 Are you ready for the weekend? Specifically, are you ready for a Long Weekend? Of course, we’re referring to the rom-com from Sony Pictures Worldwide Acquisitions’ Stage 6 Films.

Long Weekend will make its debut in theaters today and marks the feature directorial debut of Steve Basilone, who also wrote the script.

The rom-com stars Finn Wittrock as Bart who has a serendipitous meeting with Vienna played by Zoë Chao. She’s a little bit of a mystery, but the two end up having a connection and they spend a whirlwind weekend together (hence the title of the movie). As the two fall fast and hard for each other, they dont realize that both carry secrets that could be their undoing… or the chance for a fresh start.

Swinton stars as a woman who watches time passing next to the suitcases of an ex-lover who was supposed to come pick them up. Unfortunately, he never arrives. She also is with his dog who doesn’t realize his owner abandoned him.

Over the three days of waiting, The Human Voice follows this woman’s emotional journey as she goes of helplessness to despair and loss of control. However, the ex-lover finally calls, but she has taken a cocktail of pills that have made her unconscious. Fortunately, he calls again but she finds out that the voice on the other end is her own.

From the cinephile artistry of Almodovar to a little more light-hearted family fare, the Miguel Arteta-directed Yes Day will debut on Netflix today.

Based on the book by Amy Krouse Rosenthal and adapted by Justin Malen, Yes Day follows parents Allison (Jennifer Garner) and Carlos (Édgar Ramírez) who decide to give their kids a “yes day” after feeling they say no to them all the time. The rules are simple: the kids make the rules for 24 hours and all must abide by them. Sounds fun right? Well, little did these kids they know that they’d be going on an adventure around Los Angeles — an adventure that brings the family closer together.

Artist Ephraim Asili makes his directorial debut with The Inheritance which opens in virtual cinemas today.

The Inheritance made its world premiere at the Toronto International Film Festival before playing at the New York Film Festival and the Forum at Berlin. The feature chronicles the often overlooked 1985 MOVE bombing in Philadelphia.

Inspired by Asili’s own time living in Black artist collectives, the film is described as a “remix of Jean-Luc Godard‘s La Chinoise“. The Inheritance interweaves documentary footage of the bombing of the Philadelphia liberation group MOVE with a scripted narrative about young Black artists and activists attempting to form their own collective. The film also features living members of MOVE and other activists like Sonia Sanchez and Ursula Rucker.

IFC Films will serve some sci-fi thrills with Come True which drops on VOD and opens in theaters this weekend.

Written and directed by Anthony Scott Burns, Come True is a sleep-study-gone-wrong story about a high school student Sarah (Julia Sarah Stone) who is at her lowest point. When she runs away, she struggles with loneliness and recurring nightmares. She signs up for a university sleep study that offers the promise of safety and money and brings her an unexpected friend and confidant in the overseeing scientist Jeremy (Landon Liboiron).

What could go wrong?

There’s something curious about proceedings and being under observation. For some reason, Sarah’s dreams are getting worse. As the darkness begins to close in, it’s clear that Sarah has unknowingly become the conduit to a horrifying, new discovery.

In Dutch, Lance Gross plays Bernard James, Jr. who goes by the titular “Dutch”. He’s a player who is just trying to dominate the streets and beyond by any means necessary. When he gains control of an African drug lord’s stolen heroin business, he quickly makes it the most feared drug empire on the East Coast. As a result, there are plenty of people who want to take him down including a vengeful Mafia heir, an ambitious DA and a conscience-stricken former friend.

Dark Star Pictures and Bloody Disgusting will release the horror Honeydew in theaters today before it hits on demand and digital April 13.

Written and directed by Devereux Milburn, Honeydew follows a young couple (Sawyer Spielberg and Malin Barr) who are forced to seek shelter in the home of an aging farmer (Barbara Kingsley) and her peculiar son, when they suddenly begin having strange cravings and hallucinations taking them down a rabbit hole of the bizarre.