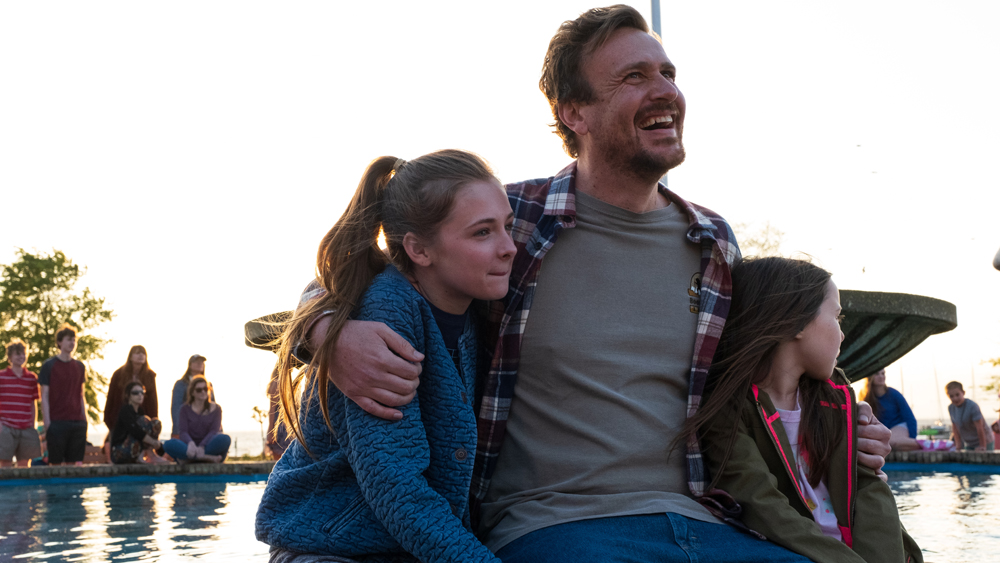 If you are looking to stir emotions and grab some tissues this weekend Our Friend has got you covered.

Based on Matthew Teague’s book The Friend: Love Is Not a Big Enough Word, Gabriela Cowperthwaite directs this heartfelt drama adapted by Brad Ingelsby that follows journalist Matt (Casey Affleck), his wife Nicole (Dakota Johnson) and their two young daughters as their lives are turned upside down when Nicole is diagnosed with terminal cancer. Matt becomes overwhelmed with being a caretaker and a parent so he calls on the couple’s best friend Dane Faucheux (Jason Segel) to help out. As Dane puts his life on hold to stay with his friends, the impact of this life decision changes all of their lives in the most profound way.

Our Friend is based on the true story of the Teague family and went by the title The Friend when it made its world premiere at the Toronto International Film Festival in 2019. Gravitas Ventures & Universal Pictures Home Entertainment releases Our Friend today in theaters as well as Amazon Prime Video, Apple TV and other digital platforms. The film also stars Jake Owen, Gwendoline Christie, Cherry Jones, Isabella Kai and Violet McGraw.

To have your heartstrings pulled, watch the trailer below.

After winning the Gotham Award for Best International  Feature, Fernanda Valadez’s Identifying Features continues to ride the wave of acclaim it makes its North American virtual theatrical debut this weekend.

The Mexican border thriller from Kino Lorber was written by Valadez  and Astrid Rondero and included a largely female cast and crew. Identifying Features made its debut at the Sundance Film Festival where it won the Audience Award and the Best Screenplay prize in the World Cinema Dramatic category.

The film, which marks Valadez’s feature directorial debut, follows Magdalena (Mercedes Hernandez) who has lost contact with her son after he took off with a friend from their town of Guanajuato to cross the border into the U.S., hopeful to find work. Desperate to find out what happened to him — and to know whether or not he’s even alive — she goes on a dangerous journey to discover the truth. At the same time, a young man named Miguel (David Illescas) has returned to Mexico after being deported from the U.S., and eventually his path collides with Magdalena’s.

Starting today, a quartet of Oscar contenders for Best International Feature will be available to watch starting with Notturno.

Directed by Gianfranco Rosi (Sacro Gra, Fire At Sea), Notturno made its premiere at the Venice Film Festival last year where it won Best Italian Film and is Italy’s official entry for Best International Feature.

Filmed over three years on the borders between Iraq, Kurdistan, Syria and Lebanon, Notturno captures the everyday life that lies behind the continuing tragedy of civil wars, dictatorships, foreign invasions and the murderous apocalypse of ISIS. What results is a cinematic journey of finding peace within chaos through a documentary-style lens.

Notturno will hit virtual cinemas today and will be available on demand and on Hulu January 29.

Next up is Hungary’s official entry for the Oscars, Preparations to Be Together for an Unknown Period of Time…that’s quite a mouthful.

Directed by Lili Horvát, the romantic drama made its debut at the Venice Film Festival and follows a Hungarian neurosurgeon, who after 20 years in the United States, returns to Budapest for a romantic rendezvous with a fellow doctor she met at a conference. When the love of her life is nowhere to be seen, she tracks him down only to have the man claim the two have never met.

Greenwich Entertainment releases the film in select theaters and in virtual cinemas today.

Co-written by Alala and Yousef Ibrahim, You Will Die At Twenty bowed at Venice Days in 2019 before going on to make its North American premiere at the Toronto International Film Festival.

Only the eighth film to be made in Sudan, You Will Die At Twenty follows a child named Muzamil (played first by Moatasem Rashid, then as a teen by Mustafa Shehata), who is — as the title suggests — expected to die at the age of 20 after a traveling sheik predicts on the day of his birth. He and his mother attempt to navigate the uncharted space between coming of age and facing the end.

Growing up with his overprotective mother, Sakina (Islam Mubarak), in a small village under the constant loom of death, the young boy becomes increasingly curious about what it means to live beyond his mother’s confines. Encouraged by local elders, his mother reels in her overprotective nature and allows Muzamil to study the Quran with the other children his age. In this newly found freedom, Muzamil finds friends, enemies, love, and tempters, though what he truly seeks is a sense of the present and a chance at the future.

Film Movement will release the film in virtual cinemas today.

Rounding out the bunch of films vying for a place on the list of Best International Feature nominees is Ukraine’s Atlantis from director Valentyn Vasyanovych which opens exclusively at New York’s Metrograph today before rolling out to select theaters nationwide.

Set during the year 2025 in Eastern Ukraine, Atlantis finds us in the desert where humans attempt to survive and water is a dear commodity brought in by trucks. In a story all too familiar, a wall is being built-up on the border. Sergiy, a former soldier, is having trouble adapting to his new reality. He meets Katya while on the Black Tulip mission dedicated to exhuming war corpses. Together, they try to return to some sort of normal life in which they are also allowed to fall in love again.

The film revisits three decades of an Israeli-Arab peace process from the perspective of the American mediators. They are the peacemakers who shuttled between Middle East capitals, and spent hours with the region’s political heavyweights including prime ministers, generals, ex-terrorists, diplomats, dictators and presidents, the people that gained intimate knowledge of the individuals and stories which dominated daily news around the world.

The negotiators speak candidly about their experiences and dissect and examine, now from a critical perspective, their own role as Americans in the process.

If you need a little more thrilling action this weekend, IFC Films is set to release the Conor Allyn-director No Man’s Land in select theaters and digital platforms today.

In No Man’s Land, Frank Grillo stars as Bill Greer, a border vigilante who goes on patrol with his son Jackson (Jake Allyn). Things get hairy when Jackson accidentally kills a Mexican immigrant boy. Bill tries to take the blame but Texas Ranger Ramirez (George Lopez) sees through his lies and as a result, Jackson flees south on horseback across the Rio Grande to become a gringo “illegal alien” in Mexico. Chased by Texas Rangers and Mexican federales, Jackson journeys across deserts and mountains to seek forgiveness from the dead boy’s vengeful father (Jorge A. Jimenez), as he falls in love with the land he was taught to hate.

Premiering on Hulu today is Derek Delgaudio’s In & Of Itself which tells the story of a man fighting to see through the illusion of his own identity, only to discover that identity itself is an illusion — sounds complex and very existential, huh?

Written and created by the titular DelGaudio and directed by the legendary Frank Oz and executive produced by Stephen Colbert, In & Of Itself is an intimate and exploration of what it means to be and be seen. It chronicles Derek DelGaudio’s attempt to answer one deceptively simple question, “Who am I?” — a question that all of us have asked ourselves at least one time in our lives.

Making its debut in theaters and digital this weekend is Psycho Goreman from director and writer Steven Kostanski.

The action-comedy from RLJE Films and Shudder stars Matthew Ninaber, Nita-Josee Hanna, Owen Myre and Adam Brooks and follows two siblings who unwittingly resurrect an ancient alien overlord. They use a magical amulet to force the monster to obey their childish whims and accidentally attract a rogues’ gallery of intergalactic assassins to small-town suburbia.

Also worth mentioning is Ramin Bahrani’s adaptation of Aravind Adiga’s novel The White Tiger which will debut on Netflix today after its theatrical release last weekend. In addition, MTV Documentary Films will make Hao Wu and Weixi Chen’s documentary 76 Days available for free via virtual cinemas in over 300 North American theaters starting January 23, which marks the one-year anniversary of the COVID-19 lockdown in Wuhan, China. MTV Documentary Films will donate $5 per viewing to the respective theaters. 76 Days was originally released in virtual cinemas on December 4.